Nominations must be RECEIVED in the office by January 10th to avoid late fees.

Nominations can be mailed to NRHA or completed online through ReinerSuite. Faxed or emailed nominations will NOT be accepted.

WHAT IS THE NOMINATION PROGRAM?

To be eligible to enter and show in the NRHA North American and European Futurity and Derby, a horse must be nominated and/or optioned into the applicable NRHA Program.

There is an “option” fee available for horses when nominating so that horses can be entered into both the North American and European Programs.

The nomination DOES NOT enter them into the Futurity and/or Derby; it makes them eligible to enter.

When entering and competing at the Futurity and Derby if the horse wins money in those Futurity or Derby classes, the nominator will receive 5% of the winnings, even if they no longer own the horse.

Only one member ID can be used as the nominator, and that number can belong to anyone. It does not necessarily have to be the owner. The nominator cannot be changed or transferred.

WHAT YOU NEED TO NOMINATE

Faxed or emailed nominations will NOT be accepted. Forms can be mailed to NRHA or completed online through ReinerSuite.

Competition Licensing:
The competition license must be paid along with the nomination and will provide proof of nomination. A horse can still be nominated without the registration papers; they will just appear as pending in the system until a copy is received.
It is important that each nominator reviews the nomination conditions before signing the form. 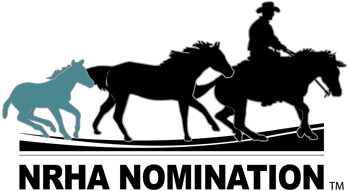 NOTE: $10 Handling Fee PER NOMINATION if form is submitted, NO FEE WITH ONLINE PORTAL

Note: If horse is optioned then it will appear in the original programs list with a “yes” in the option section. It will not appear on both lists.