HISTORY Recognizing the 2020 NRHA Professionals of the Year

SHOWS New Dates Announced for 2020 NRHA European Futurity
Franco Bertolani
By Simona Diale
This profile about Run for a Million competitor Franco Bertolani was first published in the July 2018 issue of the NRHA Reiner magazine. 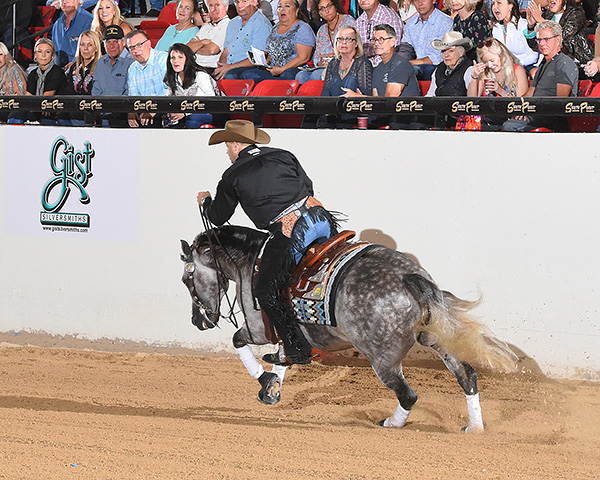 When Franco Bertolani started touring the world to learn the art of reining, little was known about the sport in his home country. “In Brazil, when horse enthusiasts would see me ride, they would walk away shaking their heads,” he recalls. “Things started to change a little when Jango Salgado started hosting clinics around the country explaining the basics of reining. It wasn't an easy task, but Jango was, and is, a great ambassador to our sport. The world was much smaller at the time, and reining was not very international at all — in the past 30 years it has changed immensely, and I have been very fortunate to have lived this process.”

Francisco, Bertolani’s father, was an agricultural engineer who worked on a huge hacienda where cattle and horses were raised. “We would use the horses to go around the farm, and I could not wait to get out of school so that I could go ride,” he said. “At that time I lived about 10 miles away from a town where a friend of my father lived. His sons used to barrel race, and it wasn’t long before I joined them. Soon after, my father purchased a horse from him for me to compete on.”

One horse led to another and soon the Bertolani’s had purchased around eight broodmares, as well as a stallion from the King Ranch in Texas so that they could start a small barrel racing breeding facility. “That’s where it all started, and that’s when I decided that my future would be showing horses. I loved the breeding and the training, and around that time, when I was about 15, I started riding with Eduardo Ribero — the very first Brazilian professional who had been to the U.S. — and under his guidance I started showing reining horses. The first NRHA Professional who ever made his way to Brazil to host clinics was Doug Milholland and we all learned a lot from him. That’s when I decided to catch a plane and fly to Milholland’s place in Nebraska with a suitcase full of enthusiasm! It was my first real contact with the reining world, and I loved it. A special moment I remember was at the Lazy E when Doug asked me to walk his horse in the arena. I could not believe I was in the same pen as all the ‘big guys,’ my heroes! I had always known that horses were going to be my life, and after that experience I was determined to make it my life.”

Following his U.S. experience, Bertolani went back to Brazil and started his own business. At the same time, he attended business administration night classes at university. Results with his horses started coming in, along with multiple Brazilian Futurity Open wins, and his business flourished. “I was really happy with the way things were going, but I began to feel that if I wanted to become better, I needed to move to another country where reining was bigger,” he said. “I would go to the NRHA Futurity every year, and that’s where the opportunity to go work in Italy came up. Everyone thought I was crazy, but I made the move. Things were not as easy as I had imagined they would be — I worked in a few facilities until I finally rented stalls near Bologna where I met Giorgia, my future wife. Shortly after, together we moved south and went to work for Castrucci. That’s when Gunna Be Majestic (Gunner x Shes A Majestic Whiz), the mare that impacted my show career, came into my life.”

Though it was a tough three years, Bertolani said that during that period he grew as a professional and as a person. It was then that the opportunity to move to the U.S. came around, first working for Fabrizio Bevilacqua, and immediately after for Joao Marcos, owner of Cardinal Hill Training Center LLC. “Five years ago I came to the states with my wife, Giorgia and daughter, Bianca,” he said. “It was a big decision to make but we took the chance. When we relocated to the States, I had earned a little less than $150,000 in NRHA competition. At the NRHA Futurity last year, I surpassed the million dollar mark. It’s been an incredible journey, and I have been very fortunate to have been part of Cardinal’s foundation and growth. Joao Marcos has given me the opportunity to ride great horses as have our long list of clients which includes Domenico Lomuto of Slide Or Die, LLC. Thanks to Joao’s passion, we’ve started a great breeding program, which Giorgia oversees. It’s a lot of work, yet we couldn’t be any happier, and I will be forever grateful to Joao for giving us this opportunity and for the great work he does with the Reining Horse Foundation in promoting the sport of reining all over the world. I have been part of the promotion through the clinics that are organized worldwide, and I love teaching.”

The journey around the world has led Bertolani to the coveted NRHA Million Dollar Rider status, and he is quick to credit his wife for his success. “Giorgia is my world,” he said. “From the moment we met, she has always been by my side. Family is important, and together she keeps both our family and everything that revolves around the horses. Behind success there is always a lot of work, and sometimes it is difficult to see the bright side of things. Giorgia always manages to shine a light on everything.”