HISTORY Horsewoman of the Year Award Renamed to Honor Becky Hanson
Duane Latimer
By Pat Feuerstein
This profile about Run for a Million competitor Duane Latimer was first published in the May 2004 issue of the NRHA Reiner magazine. In 2014, Latimer crossed the threshold to become an NRHA Two Million Dollar Rider. 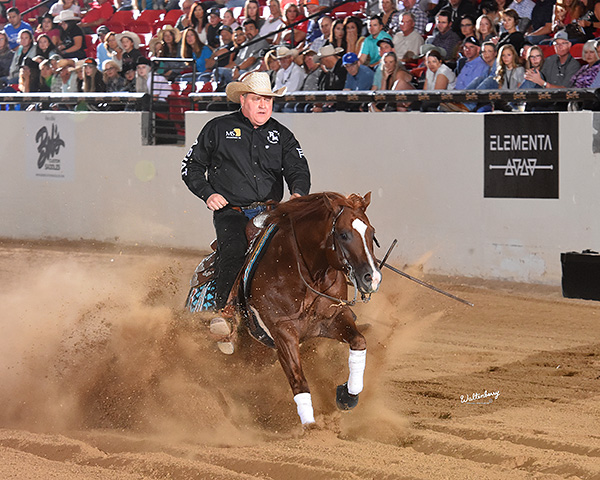 When it comes to parenting, Wayne and Sharon Latimer are batting 1000%. Their sons, Dean and Duane, have followed in their footsteps and both have made successful careers as horse trainers within the reining horse industry.

“I first met the Latimer family in 1984,” says Bob Loomis. “I was looking for an assistant when Guy Gauthier told me he knew some boys up in Canada. He introduced me to Dean who came to work for me just out of high school. He worked for me for seven years. I just think the world of the whole family,” continues Loomis. “Wayne and Sharon are both professional horse trainers and they are outstanding people. They put the best foundations on both Dean and Duane. They’ve both been in the show pen since they were little kids. Both are so comfortable in the arena, because it’s been a play pen for them since they were little.”

“We grew up as horse trainer’s kids,” says Duane, who confesses he never thought about being anything but a horse trainer. “Dad had a big business,” says Duane. “And we all helped out. I remember when I was a teenager going to AQHA shows with 30 head of horses – everything from halter horses to performance horses. He was always an avid fan, but Dad didn’t specialize in Reining in the beginning. That developed over time. You couldn’t make a living just doing reining horses in those days. You had to do everything else to support the reining hobby.”

While we most closely associate Duane with Reining, his background includes showing halter and all-around horses in AQHA events. In fact, according to Duane, “The first big thing I won, was the 1985 AQHA Reserve world championship in Western Riding on a horse call General Bonanza. I was 22-years-old and it was big.”

Sharon Latimer is now a professional equine photographer. Wayne is still a professional horse trainer specializing in breeding and training reining horses. They not only gave their sons a good foundation, they gave their boys the opportunity to find their niche and they provided a home base – one that Duane would go back to through the years as he made his way up the ladder in the performance horse industry.

Duane was doing well in Alberta, Canada, at AQHA shows and in the few reining futurities offered, but couldn’t resist the opportunity to work for Bob Avila in Oregon. “He had some really nice horses and it was a great opportunity for me,” say Duane. “He was still doing everything, so I worked with the all-around horses, which is what I grew up with. It was an excellent experience.”

In 1985, Duane went back to the home front in Alberta and was training with his dad when he went to an AQHA show and met Wendy Moisey. “She was showing halter horses at the time,” says Duane. They were married in 1986 and have three children: Blain (13), Cody Lynn (11), and Tyler (9). After Duane won the 2003 NRHA Open Futurity on Lance Griffin’s The Great Whiz, he said that he and Wendy had been through thick and thin together. “She’s been with me since the very beginning,” said Duane – and she’s shared every adventure.

“Shortly after Wendy and I met, I went out on my own and we got married,” says Duane. Once again Latimer was enjoying success in the show pen in a variety of events in Canada.

“I rode in my first NRHA Futurity in 1986, but I didn’t do anything. I wasn’t remotely ready,” says Duane, who earned his first NRHA paycheck in a Limited Open class in Regina, Saskatchewan, Canada, on a horse called Yogis Major Image. In 1991, Duane did earn his first Futurity paycheck: $9.49 for placing 15th in a Limited Open Futurity go round on Scotto Spider!

Latimer was then offered a job training horses for Lucio Ferrarini in Italy. “Moving to Italy was a very good decision. It took some sacrifice, especially on Wendy’s part, but that was the first chance I got to ride straight reining horses,” says Duane, and he did very well on the excellent stock provided by Ferrarini. “Italy was such a huge thing for me,” says Duane. “There was good competition and I had quite a few nice horses to show.”

“I knew when I moved to Italy that we wanted to give ourselves an opportunity to get back to the States,” recalls Duane whose next stop was Arizona where he worked out of Dave Belson’s facility for two years. “I loved Arizona, but I missed the green grass and change of seasons. And if you’re going to be in the reining horse industry, this is the #1 spot in the world.” Next stop: a year at Carol Rose’s training facility in Gainesville, Texas. “I wanted to get in the area and working for Carol opened doors for me,” says Duane.

When he went to work for Loomis in Marietta, Oklahoma, Duane recalls, “I was pretty secure in what I was doing. I thought I was right on the edge of stepping up. I wanted the opportunity to have good horses and the opportunity to train them. It worked out as good as anybody could hope. It’s been an awesome deal.” That’s for sure. Before 1998, Duane Latimer had NRHA Lifetime Earnings of $38,518.77. While working for Bob Loomis, between 1998 and his Futurity win in 2003, Duane Latimer earned an additional $1,085,316.80! He also earned NRHA Million Dollar Rider status!

“I thought that maybe, with a little bit of luck, I’d get to the million dollar mark,” says Duane. “But I just didn’t know about winning the Futurity. That’s huge. It’s a goal you always dream about, but you don’t know if you’re going to get it. And you don’t want to spend your whole life chasing a dream you’ll never get. It was cool, too, because Wendy and the kids were there. My parents were there and Wendy’s parents (John and Johanne Moisey) were there too. It was very emotional for me. It means so much.”

According to Duane, “You have to work hard – nothing is ever handed to you. And there’s a certain amount of luck involved. There are a lot of people who work real hard, but don’t get the opportunity to have success.” Duane feels he’s had more opportunity than most, but then again, Duane made the most of each opportunity. He had the foundation, the experience, and the talent. And he was never afraid of hard work. He didn’t have to spend a lifetime chasing his dream of winning the Futurity. And he was right about reaching the million-dollar mark – it just came a little sooner than he expected. Congratulations: Duane Latimer - NRHA Million Dollar Rider.