HISTORY Horsewoman of the Year Award Renamed to Honor Becky Hanson
Craig Schmersal
By Pat Feuerstein
This profile about The Last Cowboy contributor Craig Schmersal was first published in the February 2006 issue of the NRHA Reiner magazine. In 2018, Schmersal crossed the threshold to become an NRHA Four Million Dollar Rider. 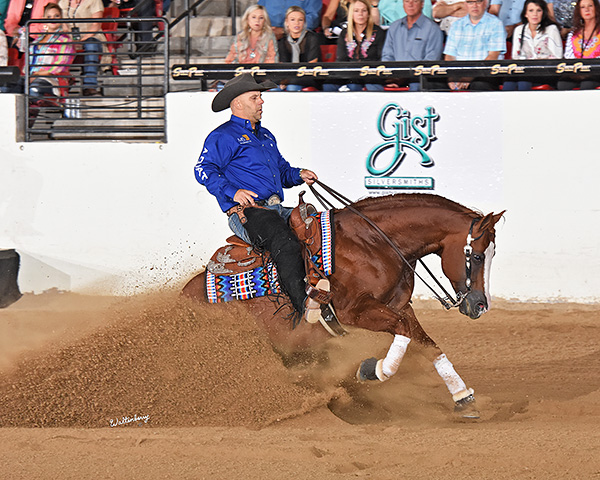 But just one month prior to the Futurity, Craig competed at the 21st Annual SWRHA Futurity and Show in Ardmore, Oklahoma. During those two days of competition, Craig didn’t win a class, but he did earn $10,354.63 by consistently placing his horses in every class entered. And it was that $10,354.63 that put him over the top and made Craig Schmersal NRHA’s newest - and youngest - Million Dollar Rider.

Those two shows are significant. They accurately reflect Craig’s outstanding ability in the NRHA show pen and the fact that his NRHA Lifetime Earnings of $1,103.329.33 speak of a career that has, at times, been spectacular, but on a day-to-day, show-to-show basis, has always been consistently competitive. It didn’t happen overnight.

Craig Schmersal was born and raised in northwest Ohio in a town called Columbus Grove. He always had a passion for horses and he always wanted to be a horse trainer. After a trip to the All American Quarter Horse Congress in 1981, Craig started to ride. He was just eight-years-old.

Craig’s father, Chuck, supported his son 100 percent. He nurtured the passion, encouraged the dream and, most importantly at the time, bought Craig horses to ride. Craig started with Appaloosas then got into Quarter Horses, but admits, “I never had a pleasure horse worth a darn. I was always trying to teach them how to stop and turn.”

According to Craig, “I always rode horses for other people. When I was a freshman in high school I rode eight horses every day after school.” But he was just a kid – and relied heavily on the constant support of his dad.

”My father sacrificed a lot,” explains Craig. “He had a big job and worked long hours. He’d leave for work at 3:30 in the morning. I got home from school at four in the afternoon, and then Dad would take me to ride every night at an indoor arena because we didn’t have one. My dad and I would get home at 11:00 pm, then start all over the next day. I wouldn’t be where I am now without my father’s drive, his love of horses and his support. We spent a lot of time together. It was our deal.”

From very early on, Craig’s dad also made sure that his son had the right opportunities and every advantage. “I rode with Mike Flarida as a Youth kid during the summer,” says Craig. Pretty good company for a young reiner - Mike is a multiple NRHA Futurity Champion. “I idolized Mike,” says Craig who learned his lessons well for six consecutive summers.

Chuck also gave Craig another hot commodity for a youngster pursuing a dream - the confidence to fly the coop and leave Ohio to expand his horizons. Craig was just 14-years-old when he started to spend his summers on Long Island, New York. Long Island was a hotbed of reining activity and home to some very serious reiners who had highly competitive stock. Craig’s low-key manner, excellent work ethic and obvious talent were impressive. On Long Island, Craig soon became everyone’s favorite teenager.

“I spent the first two summers on Long Island with Henry and Elaine Uvino,” explains Craig, “Then, when I graduated from high school, I went back to Long Island and worked for Joe Annunziata for two years.” Craig was on his way – and he was still eligible for NRHA Youth competition. In fact, Craig’s first NRHA successes came when he placed and won the two Youth 14-18 classes at the1988 Joe Cody Classic held at Willow Brook Farm in Catasauqua, Pennsylvania. The horse was Leo Money Step. Craig finished fourth in the NRHA Youth 14-18 Top Ten standings that year.

When Craig was no longer eligible for Youth, he started riding as a professional in Limited Open competition. He had success, earned NRHA paychecks and valuable show-ring experience on good Long Island-owned horses like Set The Pace, Heart By BH, Vicks Enterprise, Soda Pop, Rockslide, The Great Escape, Cee Leo Step, My Ways Nicki and Scotch Bar Jim. He was fourth in the 1991 NRHA Limited Open standings on Joe Annunziata’s Heart By BH and in 1992 Craig finished third in the NRHA Limited Open Top Ten standings on Tony Vespro’s Soda Pop.

After his Long Island tour, Craig went to work for Dutch Chapman and worked for two years in Maryland. Then, in 1994, Craig made NRHA history on a horse that would go on to be an NRHA Hall of Fame inductee. In 1994, Craig Schmersal had the opportunity to show Cee Blair Sailor owned by Dave Connor.

According to his Open World Champion article in the April 1995 edition of the Reiner magazine, Craig and Sailor made 55 trips to the show pen and had seven tie-breaking runoffs. His 92 paid entries, including cross-entries, resulted in 90 paychecks, 56 wins and 31 reserves!

Perhaps the sweetest victory was in Augsberg, Germany, at Americana. Craig and Cee Blair Sailor won both go rounds and the Open championship by eight points! “Winning that Open title was special – I was so young and I had never been out of the country before,” says Craig.

Craig then spent two years riding with Randy Paul in Arizona. He made his first NRHA Futurity Open Division Finals in 1995 aboard Mr Diamond Dun It. “I just missed the Finals in 1996,” says Craig. “Then I made the 1997 Finals on a Doc N Jose son, Gunna Smokem. I’ve had a finalist every year since.” The Arizona experience was very important to Craig. That’s where, in 1996, he met his wife Ginger. “I went out on my own in 1997 and we got married in 1998 – the same year we moved to California,” says Craig.

Starting with Craig’s dad, there were obviously people who positively influenced Craig’s career, but he is quick to say, “The person having the biggest influence on my career would be my wife.” He explains, “When we first started out and I didn’t have anybody to watch me, she was my eyes. Ginger’s the one who said ‘that looks good’ – or ‘that looks bad.’ She’s very good on the fence and she has a good eye for a horse. She picked Mister Montana Nic and Tidal Wave Jack out of a field. You know how horse trainers are. We buy on the excitement plan. But Ginger taught me a lot about the business-side of training of which I had no clue. She’s been great for me – and great for my business.”

“Cee Blair Sailor got me rolling,” says Craig. “He taught me a lot about showing a reining horse.” But ask about “career makers” and Craig immediately responds with “The three stallions we own in partnership. They’re horses we bought and trained ourselves.” And they include Tidal Wave Jack owned by the B S Syndicate, Commanders Nic owned by the Commanders Nic Partnership and Mister Montana Nic owned by the Montana Nic Syndicate. “Each one has earned over $100,000,” says Craig. “And, with over $256,000.00 in NRHA Lifetime Earnings, Commanders Nic is the highest money-earning horse in NRHA history. Most people are lucky if they have one horse that earns over $100,000 and I’ve had three – almost back to back.”

Each of these three stallions made the Finals of their respective NRHA Futurity. Tidal Wave Jack was the first in 1999. Mister Montana Nic was next with a top-ten finish in the 2001 Futurity. Commanders Nic placed fourth in the 2002 NRHA Futurity, was the 2003 NRHA Derby Reserve Champion and then won the NRHA Derby in 2004.

In September 2005, Craig and Tidal Wave Jack scored a 231.5 to win the FEI World Reining Masters Finals held in Manerbio, Italy. This was not Tidal Wave Jack’s first international competition. He and Craig were on the gold medal Team USA at the 2002 World Equestrian Games in Spain. “Making the team and going to the Games in Spain was awesome,” says Craig. “So was winning the Masters in Italy. The crowd in Spain was great – but the crowd in Italy was totally fantastic. They weren’t rooting for a particular team. They were rooting for the sport of Reining.

“Mister Montana Nic has been so pure – he’s such a fun horse to train and show,” says Craig. “He wants no trouble. And when people see our horses they always ask who he is because he’s so pretty. He’s just true blue in the pen.” Tim McQuay showed Mister Montana Nic at the 2005 FEI World Reining Masters Finals competition in Manerbio and placed second. “Tim hopped on him on Monday and then showed him a few days later wide open,” says Craig. “And he (Mister Montana Nic) just hung with Tim the entire time. He just does his job. I asked Tim, ‘How is he’ and Tim said ‘Very uncomplicated.’ That was a feather in my cap. For Tim to do so well on him and like him so much – that was pretty special for me.”

Then there’s Commanders Nic – a very special horse indeed. “He never missed a finals,” says Craig. “And I don’t think I ever took him to a schooling show. He’s been truly amazing in the way he’s trained. Every time you walk through the in gate you know you have a pretty good chance of marking a 75. Sometimes you mark a 76 – sometimes you mark a 74.” This is a horse that truly delivers – every time out. In just three short years of NRHA competition, Craig and Commanders Nic have earned $256,351.83!

Although Craig, at age 33, is the youngest reiner to attain Million Dollar Rider status, he’s been at this game for almost 20 years. “When I started, you could buy the best Futurity prospect in the business for $3,500. We rode reining horses because we loved it – not because we thought we’d make any money at it. This was something I was going to do regardless of whether or not I got rich. I really didn’t care if I had money. I just wanted to ride horses. I’ve slept with mice – woke up wet because the trailer I lived in leaked – I didn’t have a car until I was 21-years-old because I made $100 a week – but I was happy if I could eat and once in a while drink a beer. That was a treat.

“I never thought in a million years that I would be where I am today,” continues Craig. “I get to thinking about winning a million dollars and ask myself how did I ever do that? All the other NRHA Million Dollar Riders have won at least one Futurity.” Up until his third place finish in the 2005 Futurity, Craig has never placed higher than fourth – but as previously mentioned, he’s never missed a finals since 1997.

“I’d like to win the Futurity some day, but if not, I can’t complain. I don’t know if it’s right or wrong, but I’d rather have half a loaf than no loaf at all. I know my horses and I know what they’re capable of – and I show that.” The result, of course, has been horses with longevity – that consistently earn a paycheck – actually – lots of paychecks.

“It’s not about the destination,” says Craig. “It’s about the journey. I firmly believe that. I feel very lucky to have the career that I have.”

“I really like the cow horse,” says Craig. “It’s a lot of fun. But I’ll never stray from the Reining. I have a lot of confidence in my abilities. I know I’m capable of getting one to the show pen and to the NRHA Futurity Finals.”

That’s what being a consistent player and an NRHA Million Dollar Rider will do for you!